Towards Gold Standard for Making Renewables Safe for Biodiversity 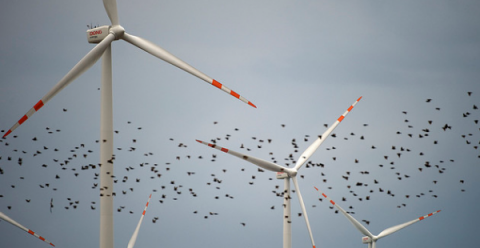 The following post was written by Patricia Bliss-Guest, Program Manager for the Climate Invest Fund (CIF). Original article can be found on climateinvestmentfunds.org

On June 21, 2013, I shared the platform with former U.S. Treasury Secretary, Hank Paulson Jr., and other dignitaries to exchange views about the relationship between wind power, biofuels, and biodiversity at the BirdLife International World Congress in Ottawa, Canada. We were among the 600 participants from 120 countries that attended this important forum held every four years to discuss the governing agenda of BirdLife International, as well as key issues for conservation and sustainable development.

Speaking on behalf of the Climate Investment Funds (CIF), I explained how the work we are doing, in partnership with BirdLife International, in seeking to ensure that low carbon development — particularly in wind power — is compatible with conservation.

The CIF has allocated more than $700 million in support of wind power expansion in eight countries including Ethiopia, Egypt, Mexico, Morocco, South Africa, Turkey, and Ukraine. Addressing the impact of wind power development on birds and bats, therefore, is critical to the success of CIF-backed wind projects.

This is why, for the past two years, the CIF has been bringing together CIF pilot countries and other practitioners to share and learn from experiences with an aim to understand better the impacts of wind power on birds and bats and how to minimize them.

Our goal is to build a community of practice to facilitate lesson-sharing and exchange of models, information, and best practices throughout the world. Our partnership with BirdLife International has been critical in helping us to understand and appreciate the intricate link between wind power and birds and bats. I shared some of the interesting lessons and ideas emerging from our learning efforts.

In Turkey, for example, a private utility company, Zorlu, installed Turkey’s first bird monitoring radar system at a wind farm in 2011. The system automatically shuts down the turbines once bird movement is detected, granting birds in flight safe passage. We brought Zorlu to our 2012 Master Class on Managing the Impact of Wind Power Development on Birds and Bats to share their initiative with other CIF countries, and wind-focused Egypt, South Africa, and Ethiopia were keen to learn more and explore the feasibility for adoption in their own countries.

In Egypt, siting of wind power projects has become a critical issue. The nation lies within the Mediterranean/Black Sea Flyway connecting Europe with Africa and constituting the world’s largest bird migration system with more 300 migratory species, according to BirdLife International. A feasibility study of a CIF-supported wind project has led to a decision by the Government of Egypt and the African Development Bank to relocate a 200 MW wind farm away from the sensitive areas of migratory birds.

I did my share of talking, but I mostly listened, and it was heartening to hear about the fruits that our partnership with Birdlife International is bearing. For example, we heard that the CIF’s scoping mission to South Africa in 2012 has helped BirdLife South Africa develop a stronger relationship with the South African government and deepen the discussion on the impact of wind power on biodiversity.

A participant from Egypt who also participated in the CIF scoping mission to Egypt said the 2012 event gave credibility to the conservation community in their subsequent engagement with the government and other stakeholders leading to the signing of a memorandum of understanding between the Egyptian government and the Migratory Bird Species Project.

During the vibrant discussions of the day, we seemed to agree on important actions that will promote a harmonious relationship between wind power and birds and bats. Among my takeaways were the following:

•Capacity Building: There is need to use science-based approaches to mitigate impacts of wind power on birds.

•Knowledge Exchange: The knowledge gap can be bridged by sharing the expertise of biodiversity organizations more closely with governments. Partners in the multilateral development banks (MDBs) implementing CIF programs could play a role.

•Location: Project sites need to be thought through carefully because if the right location is selected, the cost of managing the impact of renewable energy will be minimized without having to introduce temporary shut-downs of power plants.

•Strengthen partnerships: There is a need for all partners implementing renewable energy projects to work together towards similar safeguard standards.

I have a personal ambition for CIF-financed wind power projects to be the gold standard for how wind farms can be compatible with conservation. We recognize that much work remains to be done for this ambition to become reality. And in order for this to become reality, we need buy-in from all of the key CIF stakeholder groups.

We believe that by starting to foster conversations among countries, MDBs, project developers, and conservation experts, we can raise awareness and understanding of risks, sensitize partners to solutions, and foster important South-South exchange.