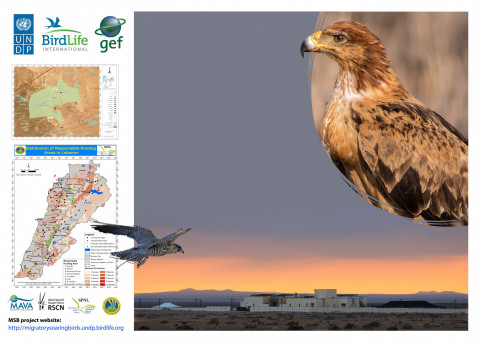 Illegal Killing of Birds (IKB) in the Rift Valley/Red Sea flyway is the greatest direct threat to migratory soaring birds. IKB is widespread and largely indiscriminate in the region causing severe declines of the populations of many globally threatened and vulnerable species. Sustainable Hunting Areas have recently become as one of the proposed solutions for IKB within the MENA region.

A webinar entitled “Sustainable Hunting Areas in MENA Region” was organized by Migratory Soaring Birds (MSBs) Project, funded by GEF and coordinated by UNPD, on December 20th, 2020 aiming at discussing the principles of Sustainable Hunting and sharing experiences from Lebanon and Jordan.

The concept of sustainable hunting was highlighted by Asad Serhal, the Director of the Society for the Protection of Nature in Lebanon (SPNL), as a solution against illegal killing of birds, especially that hunting is a cultural practice in our region. He ensured the importance of developing a law organizing bird hunting as well as the enforcement of this law. He shared his aspires to develop sustainable hunting strategy in our region and build the capacities of hunters.

Case studied from Lebanon and Jordan were presented during the webinar. Dr. Manal Nader; Associate Professor, and Manale Abou Dagher; Program Assistant, from the University of Balamand presented a research to mapping potential responsible hunting areas (RHAs) in Lebanon. An interactive map was developed, showing the potential habitat maps for 16 game species, 2 strategic maps, and detailed maps for 10 potential RHAs. This map will help decision makers in Lebanon to understand the locations and characteristics of RHAs.

Moreover, Abdel Razzaq Al-Hmoud; head of law enforcement at the Royal Society for the Conservation of Nature (RSCN), explained that sustainable hunting means to take only as much as needed and as much as the habitat and the population can regenerate. This balance is essential to sustain a healthy game population. The development of hunting laws and regulations from 1930 till nowadays was highlighted in his presentation, and the hunter groups partnership was introduced as a supportive tool to communicate with illegal hunters and increase their awareness.

A case study from Burqu Nature Reserve in Jordan was presented by Mohmoud Bdour; Burqu program manager at RSCN. He shed lights on the falconry experiment that aims to regulate falconers' activities to mitigate the hunting and poaching pressure on the Houbara bustard communities in the wild, and support the communities who depend on falconry as traditional business activity inside the reserve and in the buffer zone.

At the end of the webinar, the floor was opened for discussion that you can hear in the recorded webinar here.

Waste and Birds: The Ultimate Solution