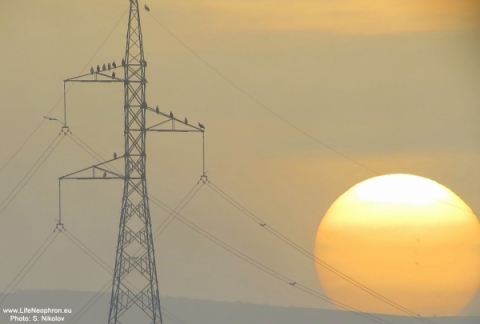 The notorious power line from Port Sudan to the Red Sea coast, which is estimated to have electrocuted hundreds and perhaps thousands of Endangered Egyptian Vultures Neophron percnopterus since its construction in the 1950s, has been switched off.

The decision to decommission and replace the “killer line” followed a MSB-funded presentation to senior government and power company representatives by SWS President Professor Ibrahim Hashim, in March 2013. By September, work had begun on a new, fully-insulated distribution line running parallel to the existing line.

News that the power line had been turned off came during a visit to the Sudanese Transmission Electricity Co. Ltd by a team from the MSB Project, to introduce the MSB project’s guidance on birds and power lines alone the Rift Valley/Red Sea Flyway.

Professor Ibrahim Hashim expressed his joy at the decision. “Egyptian Vultures and other raptors can now perch safely on this part of their migration”.

MSB Regional Project coordinator Osama Alnouri said: “This great achievement is the cumulative result of the work of BirdLife’s Bulgarian Partner in investigating and quantifying the threat to the Egyptian Vulture and other soaring birds, the targeted efforts of the MSB project and the Sudanese Wildlife Society, and the commitment of the Directors of Sudan’s Electricity Distribution and Transmission companies to solving this long-standing problem. We would also like to thank the Ministry of Tourism and Wildlife and the Wildlife Conservation General Administration for their support.”

Mrs Nada Tosheva, executive-director of the BSPB commented: “This marvelous success of the BirdLife Partner in Bulgaria and the Migratory Soaring Birds project clearly demonstrates that for efficient conservation of long-distance migrants, like Egyptian Vultures and juvenile  Eastern Imperial Eagles, the trans-continental collaboration within BirdLife network is crucial.”

“This great news shows the effectiveness of how the BirdLife Partnership works together with governments and industry. Acting locally on a global scale enables us to tackle huge issues like migratory bird conservation. Many congratulations to all involved”, said Dr Marco Lambertini, BirdLife’s Chief Executive