Strong move by Lebanese minister asking for prosecution of poachers 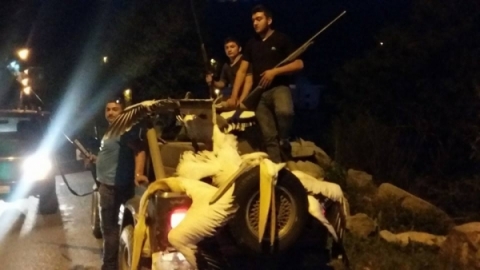 In a rare and strong move, the Lebanese Minister of Environment, H.E. Mohammad Machnouk, handed a letter to the Environment Attorney General of Mount Lebanon, judge Claude Ghanem, asking for the prosecution of 3 hunters that violated the law No. 580/2004.

The minister took the matters in hand when he was made aware of pictures of the 3 suspects posing with dead pelicans and white storks in the outskirt of the Bentaël protected area. Since the Ministry of Environment did not officially open the hunting season and in accordance with the law in force hunting is still prohibited in the country. Furthermore, the species hunted are protected under Lebanese laws and it is forbidden to display dead preys on cars and on public roads. Therefore, the minister is demanding for “ all legal measures deemed appropriate” to be taken.

The poachers risk up to one month of imprisonment and a fine equivalent to five hundred thousand Lebanese Pounds as well as the withdraw of their hunting license for a period of one to three years.

This latest positive development in the current chaotic hunting situation hopefully reflects a stronger desire from the Lebanese government to finally enforce the hunting law and capitalise on all the efforts deployed by the MSB project team in Lebanon and the Society for the Protection of Nature in Lebanon (SPNL - BirdLife Lebanon).

To not miss a thing, you can subscribe to our news notification here.