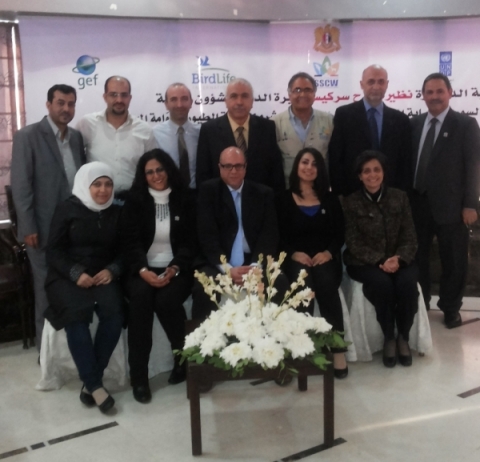 In May 2013, the Syrian government established a committee responsible for drafting a new hunting law and developing the required implementation decrees. SSCW is part of this committee along with representatives from various ministries and agencies. During this transitional situation with regards to the hunting scene, the Syrian government delegated SSCW with the task to develop a short term sustainable hunting management action plan that intends to pave the way towards the implementation of the incoming hunting law and draw the needed socio‐economic, political, cultural and institutional environment within which policies and laws will be enforced. The proposed plan addresses key issues such as capacity building of enforcement bodies, training programs for hunters, awareness raising and ensures the full protection of migratory soaring birds. On the 14th of November 2014, the Syrian Society for the Conservation of Wildlife (SSCW) presented a draft version of the national sustainable hunting management plan during a workshop held in Damascus under the patronage and in presence of the Minister of Environment Affairs, Dr. Nazira Sarkis. The workshop was attended by representatives of the ministries of Agriculture and Agrarian Reform, Environment Affairs, Interior, Local Administration, Economy and Trade, Education, Justice, Water Resources, Endowment as well as by representatives of various non-governmental agencies. The workshop provided the various participants with the opportunity to contribute to the proposed plan and give recommendation and remarks. SSCW is currently working on the final version of the plan to be handed to the Syrian government for endorsement.