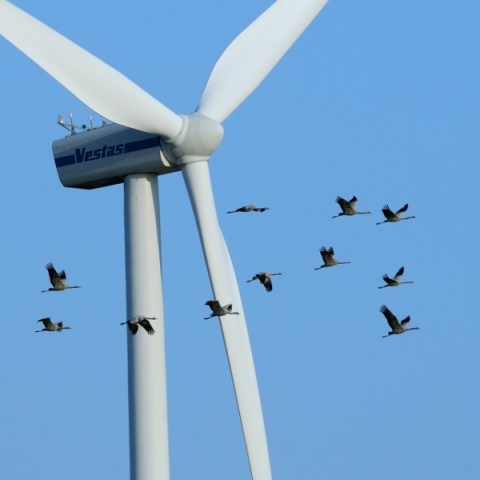 It is often suggested that birds and wind energy are incompatible. While it is true that poorly located wind farms can impact on birds (through causing injury or mortality if birds collide with the turbines, or by displacing sensitive species), bird conservationists and wind farm developers are working towards the same goal: a greener future.

The South African Wind Energy Association (SAWEA) recently launched its Code of Conduct for Wind Energy Development, which illustrates its commitment to the environment. While the code of conduct does not explicitly deal with birds, it does require SAWEA members to follow international best practice during project development, implementation and operation. It also requires its members to exercise due care to reduce the risk of negative impacts on the environment.

We are in a fortunate position that we can learn from our international partners who have years of experience in assessing, monitoring and mitigating the impacts of wind farms on birds. With the right approach and by following international best practice, conflicts between birds and wind farms can, to a large extent, be avoided.

BirdLife South Africa, in partnership with the Endangered Wildlife Trust, has developed Best Practice Guidelines for Avian Monitoring and Impact Mitigation at Proposed Wind Energy Development Sites, which are based on international best practice and are a key resource used to help minimise the impact of renewable energy developments on birds and their habitats.

To celebrate the launch of the Code of Conduct, World Environment Day (5 June) and Global Wind Day (15 June), SAWEA, BirdLife South Africa and the Endangered Wildlife Trust hosted an afternoon of birdwatching for wind farm developers and environmental consultants. Sites in and around Cape Town, including Black River and Rietvlei, were visited and many magnificent birds such as flamingos and pelicans were seen. The press release about the event can be found at www.birdlife.org.za/media-releases

This article was written by Ms. Samantha Ralston, Renewable Energy Manager at BirdLife South Africa and is available on http://www.birdlife.org.za/