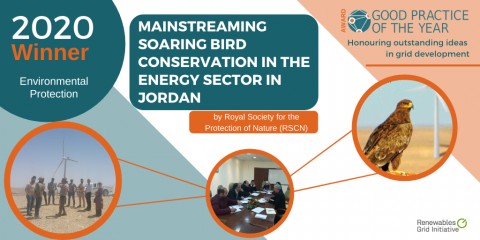 The Royal Society for the Conservation of Nature won the Renewables Grid Initiative Environmental Protection: "Good Practice of the Year"2020 Award for “mainstreaming soaring birds’ conservation into the energy sector in Jordan.

RSCN applied for the award through the Migratory Soaring Birds project, funded by the Global Environment Facility (GEF) and implemented by the United Nations Development Programe (UNDP), and Birdlife International, which aims to integrate conservation of soaring birds in the five main economic sectors that pause threats to migratory soaring birds along the Rift Valley / Red Sea flyway.

RSCN earned this international award as a result of their work to reduce bird mortality from energy infrastructures especially wind farms and powerlines. In cooperation with the Ministry of Environment, the wind developers, International Financial Institutions and electricity utilities, RSCN led the implementation of unique measures to reconcile nature conservation and economic development that directly assist local communities, in addition to protecting Jordan's unique location, which sits on the route for migratory birds specially a number of these birds are endangered birds.

National wind energy developments and birds’ guidelines were developed and endorsed at the national level.  A national Energy Round Table has been established that is coordinated by RSCN to ensure open discussions and dialogue between the government, the industry and the conservation community represented by RSCN to ensure Jordan proceed in clean renewable energy while being birds-friendly.

Moreover, a national database for bird monitoring programs in energy projects has been established at the Ministry of Environment, coordinated by RSCN to ensure all bird data are centrally compiled and analyzed by bird experts.

In addition, to reduce the risk of electrocution on migratory birds, RSCN just signed an agreement with the electricity company in Irbid and is currently working on developing national procedures on power lines and birds conservation to be taken into consideration and applied throughout the Kingdom, to ensure the conservation of bird species. In cooperation with electricity distribution companies, isolation of all the most dangerous lines in the electrocution of migratory birds will be implemented too.

This global award came to build up Jordan's position as a global model in applying the best practices for conserving nature in the world, and highlighting the results of the partnership between the RSCN as a pioneering national institution in conserving the nature, the Ministry of Environment and international donors and the conservation community.

The award was received by the representative of “The Royal Society for the Conservation of Nature”, his Excellency Eng. Khalid Al-Irani – the Chairman of RSCN. Al-Irani said that RSCN has been working since its establishment to conserve the nature with all its components, in addition to achieving sustainable development in all its social, economic and environmental aspects, referring to its role in preserving biodiversity and discovering natural heritage and cultural wildlife, including birds.

Al-Irani assured that the Royal Society for the Conservation of Nature is a national institution and a global example that has a great role in protecting the environment and spreading the culture of environmental awareness among the members of the local community, pointing to the support of the government, especially the Ministry of Environment and the BirdLife International, indicating that RSCN’s winning of this award shows the importance of the managements keenness and work to develop a system to protect wild species and implementing international agreements that the Kingdom has signed.