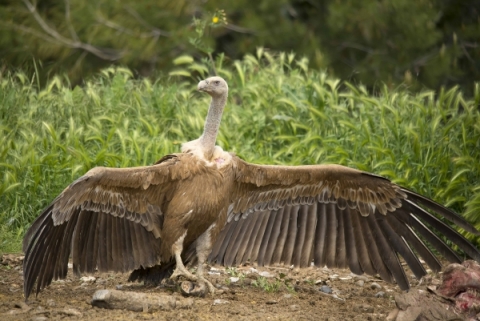 Although Vultures are often not well appreciated, they are magnificent birds that fulfil a vital role in the ecosystem and provide a major service to African society. By eating and cleaning up the remains of dead animals vultures prevent the spread of diseases like rabies and anthrax that are highly contagious to humans and wildlife.

There are 23 species of vultures in the world, seven of which are found in the American continent (New-World Vultures), 11 in Africa and the other five are distributed across Europe
and Asia (Old-World Vultures).  “Three of every four old-world vulture species are already globally threatened with extinction or Near Threatened according to the IUCN Red List of
Threatened Species”, said Kariuki Ndanganga, BirdLife Africa’s Species Programme Manager.
Ethiopia has 8 species of Vultures, including Bearded Vulture, Hooded Vulture, Rüppell’s Vulture, Griffon Vulture, White-backed Vulture, Lappet-faced Vulture, White-headed Vulture
and Egyptian Vulture.  Of these, two (Griffon and Egyptian Vultures) are migrants while the rest are residents. Of the eight vulture species in Ethiopia, four are Endangered, two are
Vulnerable, one is Near Threatened and the last one is of Least Concern, according to IUCN Red List Category.

Poisoning is the number one threat to vultures. Diclofenac, a Veterinary drug used to treat inflammation in livestock, is lethally toxic to vultures. It was this same drug that wiped out 99% of vultures in India, Pakistan and Nepal. Despite the tragic experience in Asia and the availability of safe and inexpensive drug alternatives, it has been confirmed by BirdLife that, worryingly, veterinary diclofenac is now commercially available in Spain and Italy.
Rates of decline and causes of poisoning differ across the continent – in southern and eastern Africa vultures die after eating carcasses of intentionally poisoned animals. These situations arise when poachers use poisons to kill native African wildlife including rhino and elephants or when feral domestic dog populations are the subject of a concerted poisoning campaign for example. In certain regions of Africa, vultures are deliberately persecuted for food and for body parts to be used in the traditional medicine trade, but also accidentally through habitat loss and collision with power-lines.
Vulture poisoning is almost always accidental and unpremeditated in Ethiopia. It occurs in the event of poisoning rodents, pest birds (quelea and weavers), dogs, jackals and hyenas. Increasingly, pesticide application on crops and vegetables also exposes vultures to the danger of poisoning. Though vulture populations are still relatively strong in Ethiopia, other threats are looming. “Strychnine is increasingly used by municipalities against feral dogs, and other undetermined poisons, including registered and non-registered pesticides, are used to kill hyenas and jackals. Our rich vulture populations are at serious risk when they consume poisoned carcasses” said Yilma Dellelegn, Program Officer at Ethiopian Wildlife & Natural History Society (EWNHS).
Vultures are considered protected species in most African countries, and many have enacted legislation that criminalizes the use of poison to kill wildlife. Unfortunately, contradictory agricultural and pest control regulations, poor awareness, lack of enforcement, and poor or inconsistent diagnostic capabilities usually mean that vulture poisoning often remains underreported and under investigated, with conviction and even indictments rare. Some African countries, including Ethiopia, have no laws to protect vultures from poisoning or direct persecution.
In a bid to stop this important family of birds slipping towards extinction in Europe and Africa, BirdLife International, the world’s largest Partnership of conservation organisations, which EWNHS is a member – is launching ‘Stop Vulture Poisoning Now’ global campaign on September 6, 2014 to solicit public support towards conserving vultures: www.justgiving.com/stop-vulture-poisoning-now
With a Partnership of over 100 independent organisations worldwide, BirdLife has the power and the ability to save vultures. “We know what we need to do in Europe – ban veterinary diclofenac”, said James Lawrence, BirdLife’s Preventing Extinctions Programme Manager. “We also know what we need to do in Africa – urgently understand fully the threats and extinction risk so we can act quickly”. To that end, development partners need to support the appeal and stretch their helping hand generously so that BirdLife can deploy activities on the ground to save threatened vultures and bring about a real difference in the conservation status of Vultures. The  support will help vultures to keep flying as high as they should be and continue to clean our ecosystem.

As an integral part of the Migratory Soaring Birds Project, being implemented in Africa and the Middle East, the Ethiopian Wildlife and Natural History Society (EWNHS), is in the process of mainstreaming the conservation considerations of migratory birds, of which Egyptian and Griffon Vultures are a part, into the Agricultural Sector of Ethiopia. Mengistu Wondafrash, Executive Director of EWNHS, stressed that “By working closely and in consultation with concerned departments of the Ministry of Agriculture, effort will be exerted to enhance ecofriendly use of agrochemicals, so that the anticipated agricultural productivity will increase in the country leading to food self-sufficiency, while at the same time the adverse effects of agrochemicals on biodiversity (for example on Vultures) and in the ecosystem as whole will be safeguarded.”

Are there safe alternatives to diclofenac? Yes – A safe alternative drug, meloxicam, has been identified and tested on vultures and a range of other bird species. The meloxicam patent is more than 10-years old, meaning any pharmaceutical company can produce it at relatively low costs.

List of Vultures: The list of European vultures can be found here and that of African Vultures here.