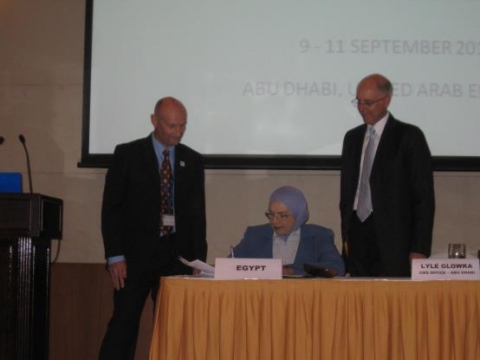 Egypt becomes the 45th signatory to the Raptor MoU

On Monday the 9th of September 2013, the CEO of the Egyptian Environmental Affairs Agency (EEAA), MSB project partner in Egypt, Dr. Fatma Abou Shouk, signed on behalf of the Egyptian government the Memorandum of Understanding on the Conservation of Migratory Birds of Prey in Africa and Eurasia commonly referred to as “the Raptor MoU”. The signing ceremony took place in Abu Dhabi during the opening of the Saker Falcon task force-stakeholders' action planning workshop and was attended by delegates from 37 countries. Egypt is now the 45th signatory to the Raptor MoU. The signature will enter into force on 1st October 2013.

This achievement was made possible by the relentless effort of the MSB project team in Egypt which made the signing of the Raptor MoU a priority in their 2013 work plan and spearheaded the process throughout the year. Mr. Osama El-Gebaly, MSB project manager in Egypt, was part of the Egyptian delegation in Abu Dhabi. “It is very important for the conservation of birds of prey in Egypt to sign and adopt this MoU and to take all needed management measures to maintain their population and habitats in our country” declared Mr. El-Gebaly.

The Raptor MoU, for which Birdlife International is a co-operating partner and signatory, falls under the Convention on the Conservation of Migratory Species of Wild Animals (CMS). The overall aim of the Raptor MoU is “to promote internationally coordinated actions to achieve and maintain the favourable conservation status of migratory birds of prey throughout their range in the African-Eurasian region, and to reverse their decline when and where appropriate”.

Signatories to the Raptors MoU are committed to adopting and implementing measures to conserve migratory birds of prey and their habitats, for example, by providing a legal framework to protect migratory species and a network of habitats and sites along their flyways; identifying important habitats, congregation sites and favoured routes; supporting relevant research and monitoring of populations, sharing results internationally; and, developing cooperative international projects and initiatives to promote effective conservation efforts.

Given their common goals, the MSB project will pursue efforts in supporting project countries to sign the Raptor MoU in the near future.