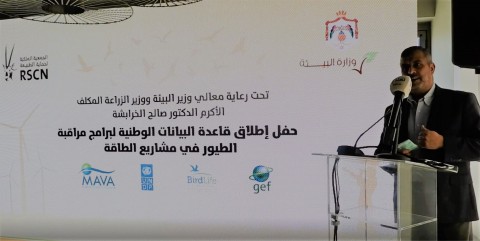 The Royal Society for the Conservation of Nature – RSCN (BirdLife Partner in Jordan) on Thursday launched the national database of the Bird Monitoring programme in energy projects, in partnership with the Ministry of Environment (MoE).
The launch ceremony took place in Wild Jordan center, number of high official, energy sector stakeholders, MoE representatives, experts in nature conservation, in addition to media representatives attended.

Reflecting the government’s awareness of the importance of Jordan for migratory birds, which is located on one of the most important bird migration flyways of the world, Kharabsheh noted that the Kingdom signed a number of international treaties to protect migratory birds, in addition to continuing Jordan’s commitment to the protection of such species.

Migratory species are strong indicators to ecosystem quality and the climate change, the minister further said.

In an effort to contribute to the protection of migratory birds in Africa, Europe and Asia as well as to emphasise the importance of their preservation from major threats, such as habitat degradation, higher mortality rates and lower breeding rates, unsustainable hunting, biodiversity-destructive economic and human activities and the accidental mortality of birds due to energy projects infrastructure, the minister said “the need for concentrated international and national efforts to protect migratory birds emerged”.

In the meantime, RSCN Director General Yahya Khaled said that:

“The RSCN and the MoE have developed special procedures for the protection of migratory birds in energy projects, noting that “the national database has been developed by national experts and they included binding rules in dealing with energy projects, in order to be bird friendly”

The database is available at www.moenv-eim.gov.jo. Whereas all energy companies are to adhere to downloading bird observation data, which would form “a national data bank”.

The development of this national database was carried out through support from the Migratory Soaring Bird project (MSB), which is implemented by BirdLife international and funded by the Global Environment Facility (GEF) and the United Nations Development Program (UNDP) and the Safe Flyways - reducing energy infrastructure related bird mortality in the Mediterranean project funded by the MAVA Foundation.