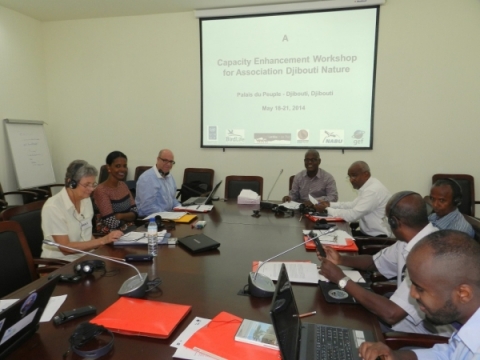 Association Djibouti Nature is a membership, a non-political, non-profit making and non-governmental organization established in 1999. It is an Affiliate Partner of BirdLife International. Its mission is to contribute to the conservation, sustainable management and appreciation of nature and to improve the livelihoods of people in Djibouti. To achieve this, Djibouti Nature works with local communities, government bodies and other prominent stakeholders to raise awareness and highlight the protection of the country’s natural inheritance for the benefit of present and future generations.

Association Djibouti Nature acts as the leading authority on Djibouti’s avifauna. As such, its work concentrates in priority on Globally Threatened Species and Key Biodiversity Sites like the Critically Endangered Djibouti Francolin (Francolinus ochopectus), the only endemic bird species in Djibouti and the Forêt du Day (an Important bird and biodiversity area-IBAs) which is the main stronghold of this species, but also on other threatened species, such as a very rare palm species (Livistona carinensis), the Red listed Gabal Elba Dragon Tree (Dracaena ombet), and the classical migrating Egyptian vulture (Neophron percnopterus).

The workshop objective’s was to enhance the core capacity of Djibouti Nature through an assessment of the capacity needs and the provision of support towards the development of strategies and plans essential for the governance and core functioning of the organization.

“After 15 years of support and collaboration, this workshop is a clear step towards a sustainable and self-sufficient future for Djibouti Nature to pursue their environmental education work and vital conservation efforts, notably for the Critically Endangered Djibouti Francolin and the Beira Antelope” declared Jens-Ove Heckel, Director of Zoo Landau and representative of NABU’s working group on Africa.

Among the various outputs of the workshop, a 4 year (2014-2017) Strategic Plan was developed to boost the efficiency of Djibouti Nature at the conservation and financial level. “Association Nature Djibouti has approved and adopted a new strategic plan that will be implemented by fresh blood as the organization is in the process of hiring new staff” said Houmed A. Bourhan, Chairperson of Association Djibouti Nature.