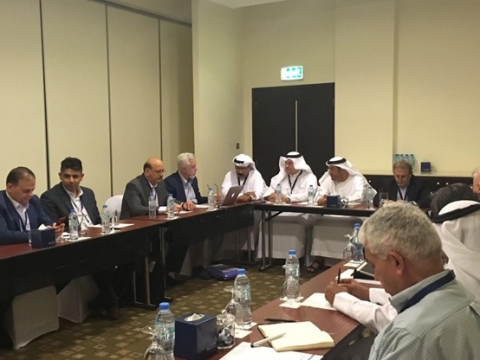 “A Summit for the Flyways” united 100 different organisations from 70 different countries to address one problem: how to protect migratory birds on their incredible journey. And with millions of migratory birds passing through the Middle East, it was the perfect opportunity to tackle regional issues, too.

BirdLife took advantage of the fact that conservation giants of the Middle East would be under one roof by holding a Middle East Partnership Meeting prior to the launch of the Summit. H.E. Majid Al Mansouri, Board Member, Rapporteur of IFHC Governing Board and Managing Director, opened the meeting with a speech on the value of collaborative work, praising Birdlife’s partners for their hard work across the region, despite the challenging political climate.

The meeting’s keynote speaker, Dr Mike Clarke, CEO of the Royal Society for the Protection of Birds (RSPB), took the opportunity to highlight the crucial role that local organisations play in spreading awareness of bird conservation among younger generations. Mike went on to share valuable insights on preserving bird habitats in the region. The meeting concluded with participants recommending strategies to further the work being done, with the support of BirdLife Chair Council, Mr. Khaled Irani.

Fruitful discussions continued throughout the Summit, with participants from the Middle East holding sessions on issues important to the region. For instance, illegal hunting and killing is still a major threat to birds. Assad Serhal, the Director General of the Society for the Protection of Nature in Lebanon (SPNL), urged the need to take action, and showcased success stories where collaborative work had made a big impact in the country.

SPNL was not the only participant speaking during the Summit: Rob Sheldon, Chairman of the Ornithological Society of the Middle East (OSME), presented a groundbreaking publication made in collaboration with BirdLife. The report assessed the scale of illegal killing of birds in the Arabian Peninsula, Iran and Iraq. In addition, three new publications were launched at a special event focusing on birds of the Middle East. A highlight was the first ever bird identification app in Arabic, with which users can discover the wealth of fascinating species in the region.

The MAVA Foundation contributed to the success of the gathering by supporting two highly important projects: the first tackling illegal killing, the second dealing with hazardous energy structures such as wind turbines. Paule Gros, MAVA’s Regional Director of the Mediterranean Basin, presented a new strategy of funding to reduce illegal killing, and called for a joint strategy to end the issue in the Mediterranean, where it is estimated that 25 million migratory birds are illegally killed each year in the region alone.

Khaled Irani opened a dedicated session tackling the threat of wind energy and power transmission, both globally and in the Middle East. As the construction of wind turbines and powerlines increases, so does the death toll of migratory birds through collision or electrocution. He shared his concerns regarding the locations of new and existing constructions, and urged the need to include the welfare of migratory birds in the planning stage, to avoid placing obstacles in major flight paths.

The United Nation Development Programme (UNDP) and the Global Environment Facility (GEF) both supported the highly successful Migratory Soaring Birds Project. They highlighted the need for governments to work together to plan the location of renewable energy plants, using a mapping tool developed by the project.

It is worth noting that one major achievement was the generous endowment of US $20,000,000 granted by his Highness Sheikh Mohamed bin Zayed Al Nahyan, Crown Prince of Abu Dhabi and Deputy Supreme Commander of the UAE Armed Forces, to establish a new Raptor Conservation Foundation. During his speech, Mohammed bin Ahmed Al Bowardi, Minister of State for Defence Affairs and Managing Director of the Environment Agency in Abu Dhabi, unveiled that his highness will be donating US $ 1,000,000 for the Foundation’s first project, whose goal is to find sustainable solutions to the electrocution of raptors in the Middle East.

To find out more about the summit’s overall outcomes, read the full declaration here.