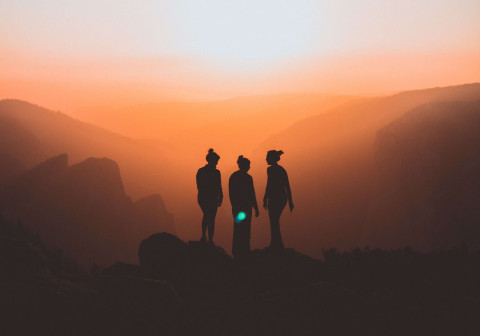 Let us celebrate women's achievements. Get ready to read MSB women fascinating stories and their advice to other women aiming to embark on careers like theirs.

Women are their own worst enemies! Not anymore

“Your work will represent you, so give it all what you have. Focus on details, because this is what will distinguish your work, especially in the GIS domain.”

“The most important aspect of success is to continue to succeed. This can be achieved through hard work, patience and loving what you do.”

They used to say women are their own worst enemies. This is not the case at the Royal Society for Conservation of Nature (RSCN), where Qamar Al Mimi and Laya Hassan, Geographic Information System (GIS) officers, proved that women can support each other, like no one else can.

Qamar and Laya started their work at RSCN as volunteers, where they worked hard to prove themselves to become GIS officers at the end. “We have each other’s backs,” Laya said, “when one of us is overloaded with tasks or absent, the other help in finalizing the work.”

After working on the MSB project, their work moved to another level. They used to map biodiversity at a national level, but now they are working on mapping birds along the Rift Valley / Red Sea flyway, making the work more interesting, yet more challenging. The workload increases, adding more pressure on keeping the balance between personal life responsibilities and professional development. This intensifies the need of supporting each other. “Working in GIS enrich my knowledge and empower me in different ways,” Qamar said, “now I can rely on myself to go anywhere, even if it is for the first time, where I can deal with spaces and directions perfectly.”

Age is no barrier

“Age is no barrier. We have to keep learning new things until we find our passion.”

Since 2009, Eng. Lamyaa Yousef, the head of Private Projects Sector at the Egyptian Electricity Transmission Company (EETC) of the Ministry of Electricity and Renewable Energy in Egypt, is working on projects focused on the renewable energy. She worked on wind power development projects along Suez Canal, an important migration flyway for soaring birds.

She started working on the MSB project from its first beginnings, as part of Egypt’s commitment to conserve biodiversity and birds. For Lamyaa, the project was a learning process full of challenges. Most of her career, she used to deal with the projects from an engineering aspect, but in this project, a new aspect arose. For the first time in her life, she had to deal with birds and their migration.

Through the project’s lifetime, she learned a lot about birds, threatened species, birds and environment conservation. This turned her to an environmentalist who does not miss any chance to raise awareness about birds and its conservation. She also learned how to balance between birds’ conservation and economic benefits, and new technologies and tools to shut down minimum wind turbines during birds’ migration to reduce the economic loss.

Years ago, she knew nothing about this, but life is changing. Nowadays, there is a noticeable tendency for girls to study renewable energy engineering. Women proved themselves in this domain and head decision-making positions at the EETC.

Women have no other option

“Believe in yourself and your qualifications, even if you have to work harder to prove yourself. Women have to be strong to reach their goals because they have no other option.”

Living in Lebanon, with all political and economic obstacles, is more than a challenge. Being the eldest sister, in a family of two sisters, had overburdened Bassima Al Khatib, Assistant Director General at the Society for the Protection of Nature in Lebanon (SPNL), with extra responsibilities. Her passion about environment and its conservation encouraged her to be one of the main members of the SPNL. She was able to prove herself in the domain in different situations, where she was the only woman in various meetings at national and regional levels.

She started working on the MSB project from its inception. The project’s approach is unique, where it is interacting with other projects and creating strong relationships with different NGOs, private and public sector organizations along the flyway. This had empowered her in networking with other partners, learning from their experiences, and knowing how to tackle the five sectors.

Despite the uniqueness of this project, Bassima faced a serious challenge to deal with men, especially within the hunting sector. In Lebanon, hunting is restricted to men. They hesitated to talk to a woman about hunting and its legal aspect because they think she knows nothing about it. Bassima’s experience and strength allowed her to stand up to men and gain their respect, where for the first time, they listen to a woman about the legal aspect of hunting and its threats on birds.

“Challenges are not an excuse to stop working. You have to move on and overcome challenges by patience and hard work.”

After being worked with the Royal Society for the Conservation of Nature (RSCN) for a long time, Muna Al Taq made a huge turn over in her career in 2020. She shifted her career path from PR and communications at RSCN to become the Flyways Officer at BirdLife Middle East. During her work in the communications, she had the chance to have a closer look at MSB project and its magnificent work to conserve birds. This had encouraged her to apply for the Flyways Officer position. Although she used to work in the environment sector, moving to a new place and holding a new position was full of challenges.

As the challenges of this turn over were not enough, Covid19 arose. This had overburdened her with more responsibilities. As a mother of two, working from home and online education was totally insane. It is really difficult to conduct meetings and meet deadlines while two kids are running around you. This came in a critical time for the MSB project, where it was the time of midterm evaluation.

Muna could not succeed in overcoming all these challenges without the support of her family and her colleagues at BirdLife. Her husband and parents were such a great support during these tough times, while her colleagues took the difficulties of being a mother in covid pandemic times into consideration.

MSB project aims to mainstream migratory soaring bird considerations into the productive sectors along the Rift Valley/Red Sea flyway that pose the greatest risk to the safe migration of these birds.  MSB project and its partners are committed to mainstream gender within their operations at both the internal level of the organizations and the project’s activities at sector level.